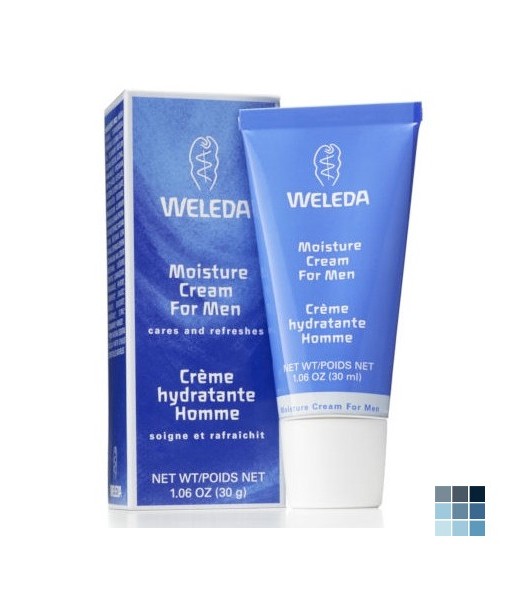 Once upon a time, most guys would not have dreamt of using moisturizer. Now, whether it’s because the world is getting colder through global warming or whatever, millions around the world are happy to do so.

Dry skin is a huge problem for men, although there are actually very few reputable products out there that can solve it.

Weleda Moisture Cream for Men has hit the market and claims to be one of the better solutions though, as we now take a look at this moisturizer in detail to see if it really can help to prevent dry skin.

The main way in which Weleda Moisture Cream for Men works is by relying on Jojoba seed oil and Marshmallow Root Extract.

The former is particularly important, as it is a substance which can easily be absorbed by the skin whilst also being able to moisturize without being too ‘oily’.

Marshmallow Root Extract meanwhile is also able to provide hydration and moisturize the skin, but it has the ability to improve its elasticity and firmness as well.

When the two of these ingredients work together, it makes it very difficult for the skin to become dry.

Will Weleda Moisture Cream for Men Work for You?

Unfortunately, this isn’t the type of product which you can apply once and forget about. If you are the type of guy who is only going to use Weleda Moisture Cream for Men sporadically, there is a high chance it won’t work for you and won’t solve your dry skin.

It’s something which needs to be applied regularly and if you can do this, the evidence suggests that it will work for you.

Firstly, the brand behind Weleda Moisture Cream for Men is a big player. Weleda have made their name in the health and beauty industry and are stocked by pretty much all of the high-street shops.

Such stores would not contemplate selling a brand that had an indifferent reputation, so this is substantial evidence for us that this is a product that can be trusted.

Then, we’re onto the science. All of the primary ingredients have been put through countless scientific tests over the years, all of which have shown they can provide more moisture to the skin.

As this is the main aim of the product, we are convinced it will work for any man who wants to stop the dryness.

When you also consider all of the positive reviews from magazines, such as Cotswold Review Magazine and Take a Break, it’s yet more evidence that this is a reputable and successful cream for any man who wants to tackle the problem.

There’s no doubt that the big downside with this moisturizer comes with the price. While we should never stereotype, a lot of men don’t tend to spend large amounts of money on skincare products.

With that, even though Weleda Moisture Cream for Men is comprised of natural and organic ingredients, the price tag of £8.76 might be off-putting for some people.

This refers to the price over at BigGreenSmile.com right here.

Be the first to review “Weleda Moisture Cream for Men”