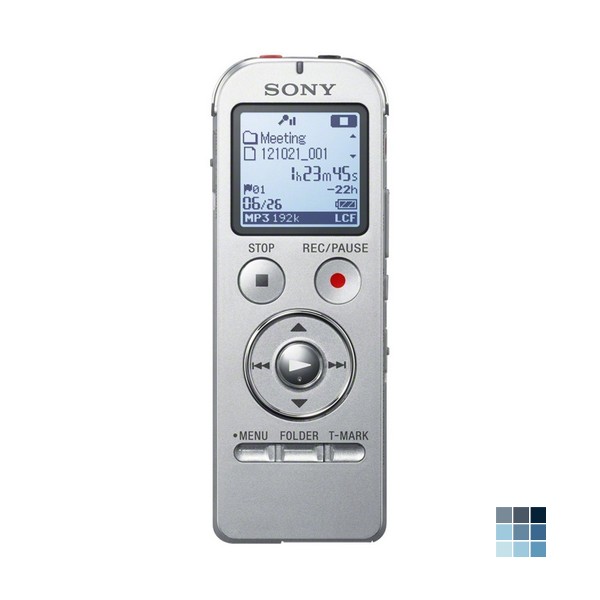 Sony ICDUX533S Voice Recorder is a 3-in-1 device which can capture audio recordings, store the files and also be used as an MP3 player. It has a high sensitivity microphone and can eliminate most background noise.

We’re in a society where information is everything and it would be fair to say that we are often subjected to ‘information overload’ – where we just take in more than our brains can handle.

It means that audio recording devices are huge right now, especially ones that can cut out the background noise and just pinpoint the important information we really need.

The Sony ICDUX533S Voice Recorder seems to fall into this category, with this 3-in-1 device having some rave reviews. Here is what we found when we reviewed the product for ourselves.

A large ‘stop’ and ‘record’ button mean that it’s especially easy to control new recordings, while an arrow system means that it’s also easy to navigate around the LCD screen and access previous material.

In terms of the mechanics, Sony ICDUX533S Voice Recorder is able to cut out background noise which can be invaluable for anyone who needs to intently study audio file.

With its intelligent bookmarking system, the product really has been made to make the analysis of audio files as easy as possible.

Is Sony Voice Recorder 4GB UX Series Suitable for You?

Now that we are in the age of the smartphone, if you rarely opt to record audio files there is no doubt that this is a device that probably isn’t suitable for you.

Most smartphones have basic microphones and if you are just looking to record a casual conversation, these will suffice.

Instead, Sony ICDUX533S Voice Recorder is for those of you who take audio recording seriously. If you regularly need to record audio events, in high quality and without all of the background noise which can make conversations all-but impossible to hear, then this is a device that could be suitable for you.

The 3-in-1 nature means that its easy to record, store and then play back, while for extra analysis you can transfer it to a computer.

Most people tend to use the device to record interviews, lectures or anything else where conversations need to be played back. If you fall into this category, Sony ICDUX533S Voice Recorder could be an ideal piece of equipment for you.

Considering the difference in storage, it goes without saying that the 4GB option represents a lot better value for money.

These prices refer to the offers that are available on Amazon