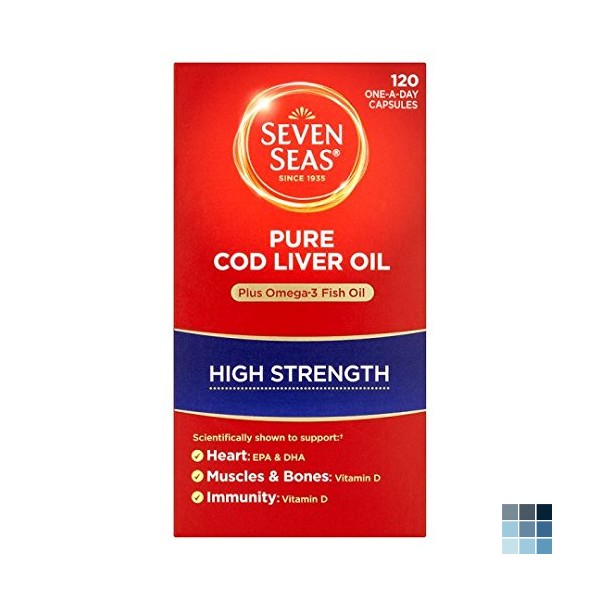 Cod liver oil is something that pretty much everyone knows about – it’s something that has been proven to aid the health of our joints and generally make us much more mobile.

Therefore, when we found a tablet-based product which contained this as well as other crucial vitamins that could provide other benefits to the body, we were captivated.

We’ll now take a thorough look at Seven Seas Pure Cod Liver Oil to see if it really does benefit the body in all of the ways that the manufacturers suggest.

The main way in which Seven Seas Pure Cod Liver Oil works is by making it much, much easier to consume the proven ingredient of cod liver oil.

A lot of products out there will hand you cod liver oil in its original form and while this will still benefit your health, it’s very difficult to actually consume due to the horrific taste.

With all of the cod liver oil goodness being contained in a tablet, there are now no such taste issues to contend with.

The importance of cod liver oil should never be underestimated. This is one substance which experts have been drooling over for years; so much so that hundreds of studies have been published which prove its effectiveness.

It contains two omega-3 fatty acids called EPA and DHA. Both of these have been associated with improving your brain’s functionality as well as your heart’s condition.

With the product also containing Vitamin D and Vitamin E, your overall health is immediately boosted due to the antioxidants that these contain.

Will Seven Seas Pure Cod Liver Oil Work for You?

As we’ve just commented on, the sheer amount of scientific research behind cod liver oil suggests that if nothing else, Seven Seas Pure Cod Liver Oil will improve the health of your joints.

However, there is also plenty to suggest that it will boost the other areas which the manufacturers claim. After all, these manufacturers have been around since 1935 – and such history only arrives through a genuine reputation.

Another reason why the product is highly likely to work for you is because of how it has been received by others. The feedback from past customers is hugely positive and the most surprising element is that it’s not just the improved joint mobility that most are commenting on.

As well as this, many have suggested that they just feel sharper through the day – which backs up the claim that Seven Seas Pure Cod Liver Oil is great for mental health.

Considering the fact that you only have to take one capsule every day, this represents very good value for money.