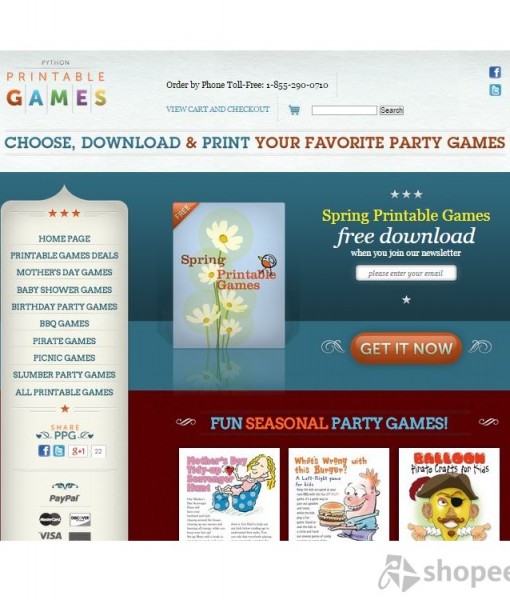 Python Printable Games allow you to download party games in an instant and print off as many copies as you need. The collection includes everything from birthdays, baby showers to standard kids’ games.

Being put in charge of any sort of party is a daunting ask – whoever you happen to be. As well as trying to impress with a good idea, there’s the small issue of finance with a lot of party ideas being expensive to say the least.

Therefore, when we saw some of the concepts from Python Printable Games, we were immediately captivated.

Although simple, some of these games could eradicate those headaches suffered by party organizers up and down the country. Here, we review the collection in more detail.

How Do Python Printable Games Work?

The process behind Python Printable Games is very simple. On first glance, the site just looks like a standard e-ecommerce platform – giving you the opportunity to browse through occasions before selecting an appropriate game.

However, any game that you do decide to buy is delivered to your inbox immediately. That’s not some sort of “next day delivery” spoof – it is digitally delivered meaning that you receive the game in minutes.

Additionally, all games can be previewed on the website beforehand, meaning that you know exactly what you are paying for.

It means that you can conjure up some entertainment for your occasion instantly and stop worrying about keeping your guests (or your kids, as some of the games are targeted at) satisfied.

Who Are Python Printable Games Appropriate For?

In truth, this could be anyone. For example, it’s possible to purchase mother’s day games, birthday party games, standard children’s games right the way down to baby shower games. In other words, there are games for every occasion.

The games are ideal for that person who has been charged with the task of organizing a party and just doesn’t know where to start.

Python have amassed a fantastic reputation over the years and have been able to put together games that appeal to the masses.

It means that your guests are very likely to appreciate the games that have been provided to them – and your organizing headaches need no longer exist!

Alternatively, you might just be a parent who wants to relieve some of the kids’ boredom through the summer. It’s another example of the games having so many different target audiences.

Prices and Where to Buy

While the prices of the products on Python Printable Games vary, on the whole the majority of games retail at $6.95.

Considering the fact that you can print off these games as many times as you want, this seems to represent very good value for money.

Additionally, it’s possible to take advantage of special promotional packages. These are generally available for $19.95, but some include as many as sixty different games so the savings can be substantial.

All of these prices are in reference to the official website at python-printable-games.com.

Be the first to review “Python Printable Games”