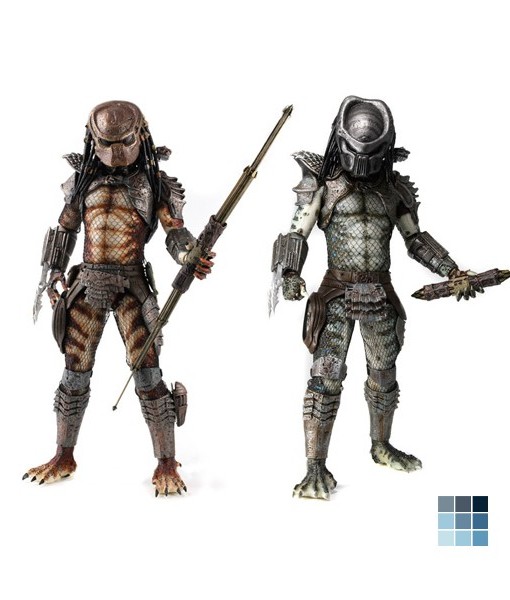 The Neca Predators 2 figures is a set of two figures from the Predator film series; the Warrior Predator and the Msked City Hunter Predator. They stand over 20″ tall and are approximately 1/4 scale.

We’ve all seen the Predator movies but most of the time, the characters stay on the big screen.

Therefore, when we saw the Neca predators 2 figures advertised, we were interested to see just how detailed they were and how much they looked like the main characters of the series.

As it turns out, the manufacturers haven’t done a bad job at all, as we take a look at this set of two figures in detail.

Unsurprisingly, the market is pretty saturated when it comes to Predator merchandise. As we all know, this is one of the most successful film franchises of recent years and this is by no means the first set of figures that have made their way to the market.

However, there does seem to be a difference with the Neca Predators 2 figures. The detail that has been put into these figures is incredible and it’s rare that you will find scaled-down versions which incorporate everything from body suit netting, to a telescoping spear.

Considering the fact that you can also maneuver the figures (which makes them completely different to models out there), it’s one of the most unique sets of Predator merchandise we have found.

Is the Neca Predators Figures suitable for you?

If you happen to be a Predator enthusiast, this is most definitely a product for you. Even if you are an adult, the fact that the figures contain so much detail means that they are entirely suitable.

Of course, children are the main market. If your child is a fan of the Predator series, and likes action figures anyway, the fact that two can battle because of their vast degree of movement is obviously going to make this product a winner.

With both standing approximately 20″, it means that your son or daughter can stage quite the battle between the figures!

You can buy it from TSCToys.com.