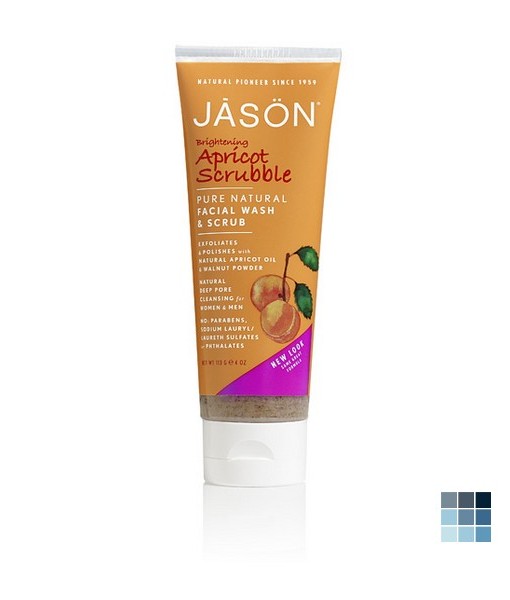 Jason Apricot Scrubble is a facial wash and scrub which is made up of organic and natural ingredients. It will exfoliate your face and cleanse it of dead skin cells to showcase a completely pure complexion.

If you’re the type of person who walks down the street and becomes jealous when you see another person’s seemingly flawless skin – you’re not alone.

In this day and age, where it seems harder than ever before to just “glow” from the outside, most of us are just crying out for smooth, pimple-free skin.

This is where Jason Apricot Scrubble comes in, with this facial product taking advantage of several natural ingredients to achieve it. Here, we review the product in detail to see if it matches to the marketing spiel.

It would be fair to say that Jason Apricot Scrubble contains three primary ingredients; Aloe Vera, Apricot Kernels and Jojoba.

We all know about the power of Aloe Vera; this is one of the most renowned ingredients in the health and beauty industry.

It used to treat a whole host of conditions, from acne to sunburn – it is one of the most proven ingredients around if you have any sort of skin complaint.

There is less information available on the other two components. Firstly, Apricot Kernels have been included in the product to act as a moisturizer.

Despite this, it’s not actually greasy, allowing your skin to become nourished without any ill-effects.

Jojoba oil is probably even less well known, with this ingredient deriving from the seeds of a shrub which tends to be found across California, Mexico and Arizona.

It’s something that can easily be absorbed, while experts have found that it is excellent in firming and softening the texture of the skin.

Will Jason Apricot Scrubble Work for You?

Jason have become one of the world’s favorite brands over the last fifty years, with their ‘friendly’ products going down a storm with a certain target audience.

However, it’s not just the animal enthusiasts who are at home with this brand, they have been established for so long for the simple reason that their products are successful, as well as sustainable.

This in itself was enough evidence for us that Jason Apricot Scrubble could be a really competent player when it comes to an exfoliating solution.

When we then delved into the science, we were even more convinced.

After all, Aloe Vera is something which has been at the center of an unbelievable amount of scientific studies which have all proven its importance for the skin, while there is also backing to suggest that Jojoba oil and Apricot kennels are really beneficial for the skin as well.

Bearing this in mind, we have no qualms that this is a skincare product which could work for most of you who try it.

The price is something that surprised us hugely with Jason Apricot Scrubble. Despite being based on organic and natural products, it was still available to purchase for just £4.99 from BigGreenSmile.com here.