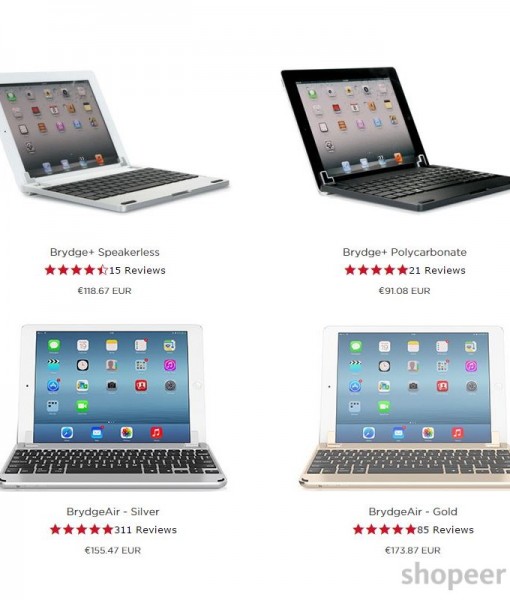 Brydge provide keyboards that can be used with the iPad Air and standard iPad that allow you to type using a traditional device, rather than the tablet touchscreens we are accustomed to.

Some people weren’t sure if tablets would cut it after Apple brought the iPad to the scene several years ago. Suffice to say, these people were wrong.

Tablets have gripped the world and they allow us a seamless way to work and play. The only problem, sometimes, is that typing can be an issue.

If you’ve got a long business email to write, tapping away on a screen is hardly ideal. This is where the Brydge Keyboards enter the picture, with this equipment instantly solving the problem. Here, we review the devices in further detail.

What Is Unique About Brydge Keyboards?

As we have already highlighted, tablet keyboards are not a new invention. They have been around for some time, with some established technology brands being in on the act.

However, the big difference with Brydge keyboards is the construction of them. They are formed out of 100% aluminum and fit seamlessly with the Apple devices.

As the company proudly state, the clue is in the name, with the Brydge aiming to bridge together the two devices so the tablet effectively turns into a laptop.

Who Are Brydge Keyboards Appropriate For?

The products are designed for anyone who wants to get the absolute maximum out of their tablet.

The iPad was designed so you could lounge back in whatever location, and comfortably browse the internet, play games or perform any task you wished in complete comfort.

Something that the iPad wasn’t necessarily designed for was writing, or any other task that involved excessive typing.

While touch screens are especially handy in some regards, in others, such as typing, they are problematic. This is where the Brydge enters the picture, with the seamless nature of the device allowing you to quickly hook it up to your iPad and start typing like you are using a standard laptop.

Pricing and Where to Buy

There are currently five products available in the Brydge range:

Brydge+ Speakerless  Designed for the iPad 2, 3 and 4, this model arrives without built-in speakers. However, it has 180 degree functionality and the classic aluminum body. It retails for $129.

Brydge+ Polycarbonate  Also designed for the iPad 2, 3 and 4, the Polycarbonate does arrive with speakers. The other difference is within the materials, with the polycarbonate body providing the device with extra strength. This product is on the market for $99.

BrydgeAir – Space Gray  This is to be used with the iPad Air and iPad Air 2. It has the standard aluminum body, built-in dual stereo speakers as well as backlit keys. It is sold for $169.

BrydgeAir – Silver  Also available for $169, the only difference between this and the previous product is the color.

BrydgeAr Gold  The final product in the collection is the BrydgeAir Gold, available for $189. It has all of the features that come as standard in the BrydgeAir series, with the gold color being the only difference.

All of these prices and product ranges are in reference to the official site of the keyboards, over at BrydgeKeyboards.com.

Be the first to review “Brydge Keyboards”