It’s the most important day of a woman’s life and for as long as the world spins round; the wedding dress is always going to be a talking point.

When it comes to celebrities and other well-known individuals, the antes are upped even more. Money is no object and taking advantage of some of the most talented designers out there, neither is style.

It means that we have seen some of the most stunning and historic dresses over the years.

Whether it’s the latest television sensation, or the Queen, few would disagree that there have been plenty of wedding dresses over the years that have shaped history. While it’s difficult to name them all, we’ve summarized the fifteen that have made the biggest statements in our eyes and rounded them up below.

Unfortunately, with some modern designs costing millions of dollars to create – it looks like many of the following are just for window shopping, and nothing else. Nevertheless, here goes… 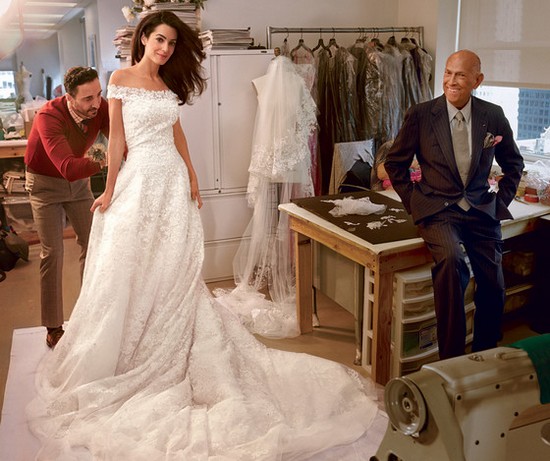 It was the wedding that captured the nation but for many women, it was the actual dress that stole the real show.

Amal Alamuddin’s dress was designed by Oscar de la Renta and in short, just oozed elegance. It was an off-the-shoulder gown, made out of French lace and unsurprisingly, had several exquisite elements.

Hand-embroidered pearls most probably fall into this category, while to complete the look the dress was followed by a classy train.

Of course, any girl wedding Hollywood A-lister George Clooney is going to need a dress to steal the show. The wedding, back in September 2014, was held in the romantic location of Venice and unsurprisingly welcomed many of the stars that Clooney has worked alongside during his illustrious career. 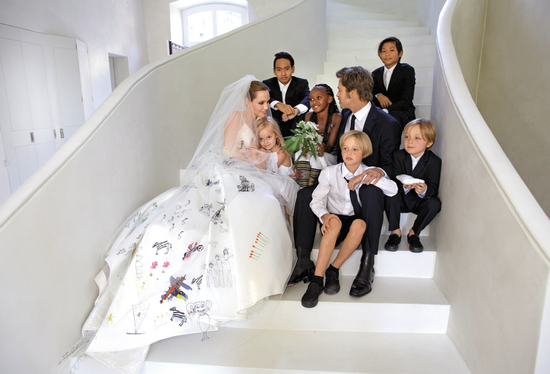 There was a long debacle of “will they, won’t they” when it came to Angelina Jolie and Brad Pitt but when they eventually did tie the knot, Angelina’s dress preference certainly didn’t disappoint.

Designed by none other than Versace, which didn’t surprise many considering this is one of her favorite designers anyway, Jolie’s dress was formed from white silk and flowed into a long skirt.

Perhaps the most unique thing about this dress was the veil though. While Jolie’s preference was to stick with the traditional white dress, she embroidered the veil with drawings made by her children.

These were sewn in and made possible by Luigi Massi, who is a tailor and personal friend of Jolie.

The wedding itself was actual conducted in secret, which disappointed the millions of fans who had been clamoring for the duo to wed for years. 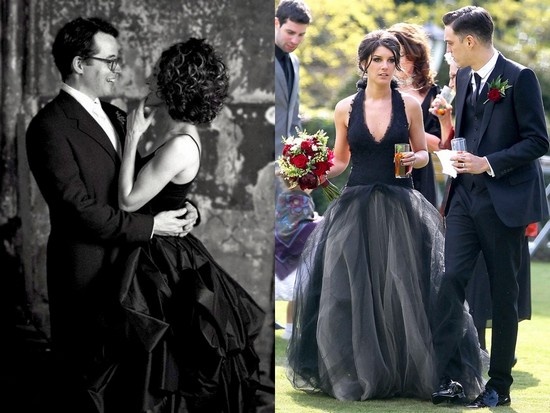 There’s no doubt that Sarah Jessica Parker shocked the world when she donned her black dress when marrying Matthew Broderick in 1997.

The fact that SJP herself even says that black was a huge mistake speaks volumes about the decision, with the famous Sex and the City actress later claiming that she should have worn white.

Despite her regrets, her decision on the day means that this dress is completely iconic. It was reportedly “the first dress she saw” and despite the controversy regarding the color, few would disagree that it was still a masterpiece. A black ruffled dress, combined with a skirt, it captured quite the picture for a wedding that was conducted in complete secrecy. 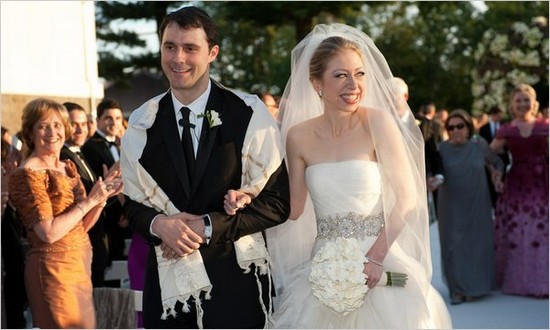 She tried to keep news of her day as quiet as possible, but some would suggest that Chelsea Clinton’s dress did much of the talking following her wedding to Clifton Daniel in 2010.

Clinton opted for the famous Vera Wang to design her dress, with the result being a strapless version which was incredibly formed of yards of ivory pleated silk. The pleated effect here was significant – it made the dress – while minor details like the silvery embroidered waistband simply added to it.

While the wedding day may have been quiet from a media perspective, there were still an estimated 500 guests in attendance. The day was set nearby the Hudson River in Rhineback, New York and was described as her proud parents Bill and Hillary as “perfect”. 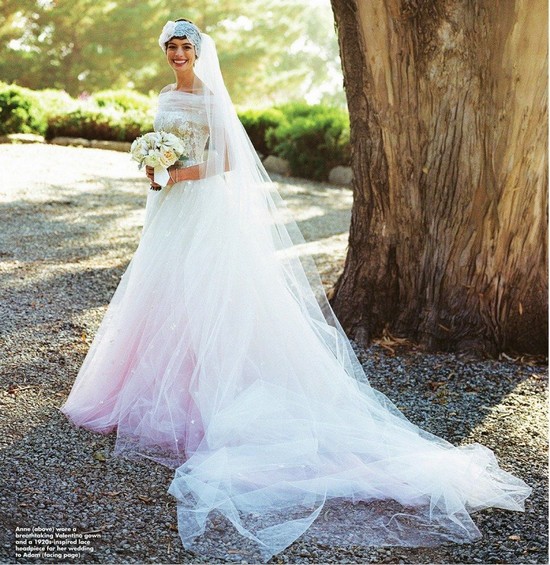 There’s no doubt that Anne Hathaway’s wedding dress just oozed beauty and extravagance and when you consider who the designer was, again it’s no surprise why. This time it was Valentino who put the gown together and while it can’t be classed as traditional, it was still one of the most beautiful wedding creations of 2012.

In short, it can be described as a pink, frothy swirl and considering its Valentino roots, it goes without saying that this proved to be the definition of class and elegance.

When you consider that Valentino once described Hathaway as like his daughter, it’s hardly surprising that his creation blew everyone away.

This was another wedding that flew under the radar and while there was intense press speculation leading up to the big day, the ceremony was a quiet affair conducted in Big Sur, California.

The lucky man was Adam Shulman and while he’s not quite as renowned as Hathaway, he’s still something of a movie star having featured in Song One and the Loft amongst other films. 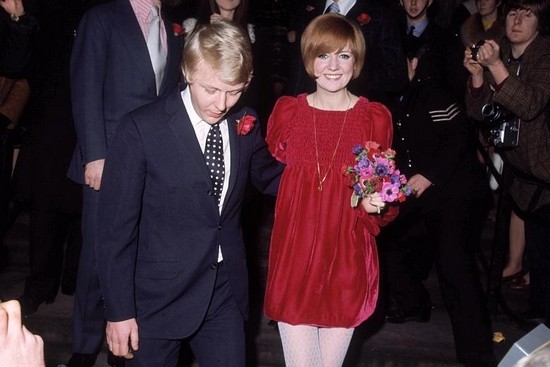 She was one of the UK’s favorite television personalities and Cilla Black’s short red wedding dress perhaps defined her personality to a tee.

Designed by John Bates, the velvet creation was by no means traditional but was still regarded as a huge fashion statement when her wedding to Bobby Willis occurred in 1969.

The two were married for more than thirty years until Willis passed away in 1999. 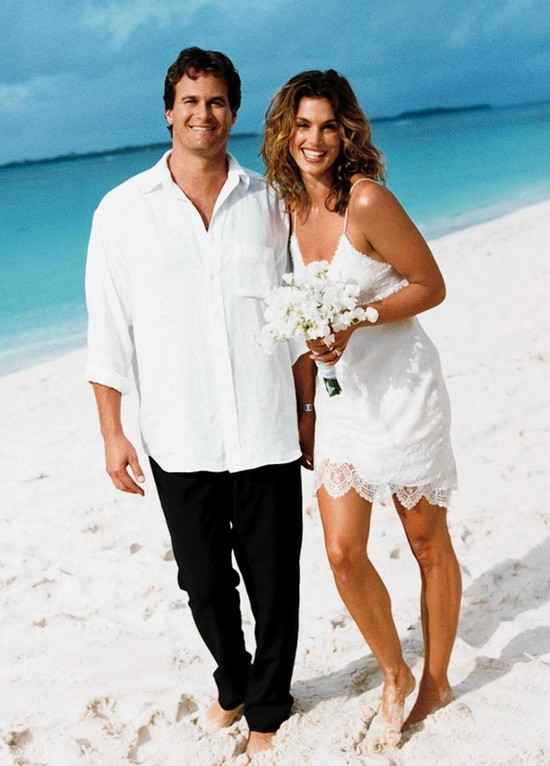 The dress that Cindy Crawford donned in 1998 can in some ways be compared to Black’s, in the way that it was short and simple. Again, it was something that captured attention though and was designed by Brit John Galliano.

Of course, the big difference between Crawford and Black’s designs were the fact that the former’s was in white. It made it slightly more traditional – and happened to inspire the generation of the 90s.

Crawford’s wedding to Rande Gerber can be described as nothing but a resounding success in reflection as well – with the Bahamas day going without a glitch and the duo still married to this day. 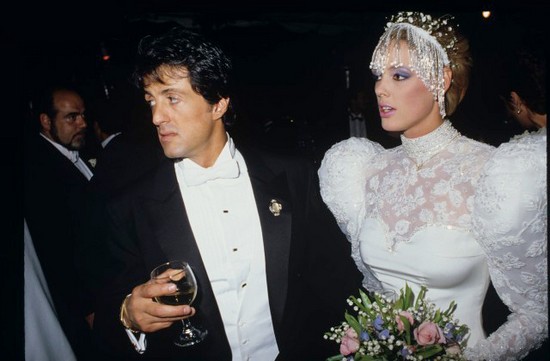 Anyone who was tying the knot with Sylvester Stallone was always going to boast something “a little different” and that’s exactly what occurred with Brigitte Nielsen.

The fact that this wedding occurred back in the 1980s means it was always going to be a lot different to many of the other creations we have listed. However, something else that sets it apart is that Nielsen designed it herself – there were no “big name” designers associated with this dress.

Despite this, it has still proven to be one of the most iconic dresses in decades. Boasting a headdress which can only be described as exotic, and giant floral sleeves, this is something that suited one of the biggest weddings of the generation.

Unfortunately, the extravagance of the dress was not to match the relationship – with this marriage lasting just two years before ending in divorce. 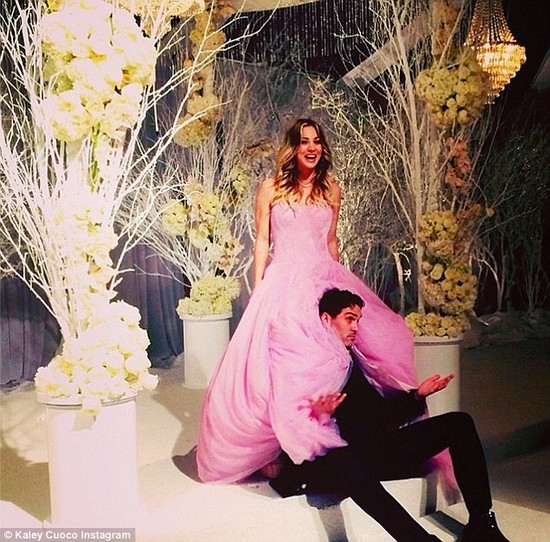 She’s one of the biggest stars on television at the moment and it could be said that Kaley Cuoco looked like something of a princess when she wed Ryan Sweeting in 2013.

The dress, designed by Vera Wang, was made to fit in the couple’s fire and ice themed ceremony. The strapless creation was entirely in pink and in some ways, appeared almost Disney-like.

Unfortunately, the wedding was not going to promote a long and happy relationship. Less than two years after the big bash, Cuoco announced that the two would be filing for divorce. 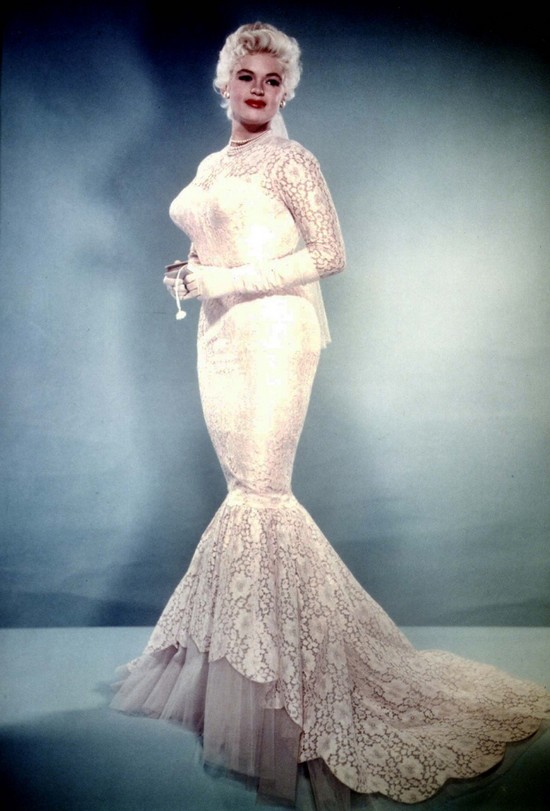 This roundup is looking at those ground-breaking dresses and when you set eyes on Jayne Mansfield’s 1958 gown – you won’t be surprised to see its inclusion.

Classed as a “fit and flare” design, it’s not just the shape of this garment which makes it iconic. The fact that it was transparent makes all the difference here and while nobody quite knows who designed the piece, it’s safe to say that it made history.

Little is also known about the day itself. This dress was at the centerpiece to her wedding to Mickey Hargitay – a marriage that lasted for six years before ending in divorce. 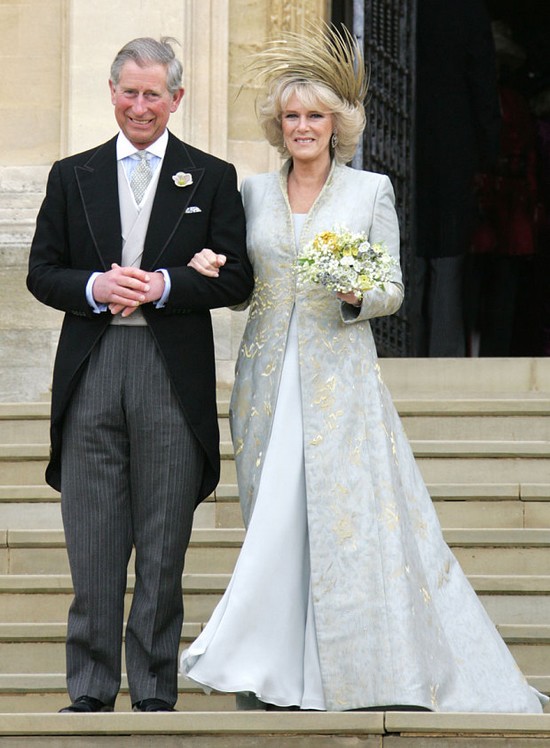 When any woman marries the future king, it goes without saying that the wedding carries something of significance.

Rather than opting for traditional white, Parker Bowles went for a cream silk gown, with this hemmed by woven discs.

To many, the designers were relative unknowns, with this dress made by the duo of Antonia Robinson and Anna Valentine who are based in London.

The wedding occurred in April 2005 at Windsor Guildhall and perhaps surprisingly, Queen Elizabeth II and Prince Philip were both not in attendance. Many high-profile individuals were there though and the event was broadcast live on the BBC. 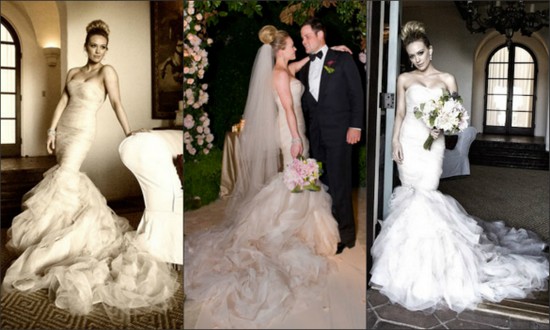 Vera Wang has been mentioned several times through our picks and here’s another one of her creations. The designer put together Hillary Duff’s iconic dress after the singer married Mike Comrie in August 2010.

Duff opted for traditional white, with the end result being a hand-embellished gown that was modelled on a mermaid-style. The twisting gown was sophisticated and elegant and formed part of a day that a lot of the press classed as the most romantic wedding of summer 2010.

Unfortunately, and not for the first time during this roundup, the romance appears to have stopped dead in its tracks. Less than five years after getting hitched, Duff announced she was filing for divorce in 2015. 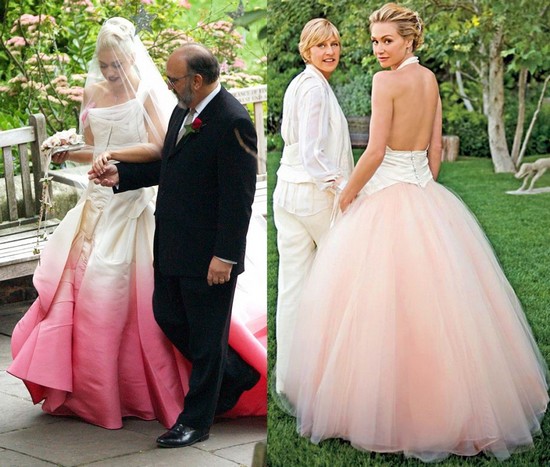 There are stylish dresses, and then there are ones like Gwen Stefani wore during her wedding to Gavin Rossdale. Stefani is known for her outlandish style at the best of times, but this time she certainly didn’t disappoint and went for a John Galliano dress which blended white with pink at the base of the gown.

The rest of the dress just flowed and made for one of the sophisticated pieces of modern history.

As for the wedding itself, this looked to be one of the most successful showbiz couples up until recently. Stefani and Rossdale were married for thirteen years, before the relationship came to an end in 2015. 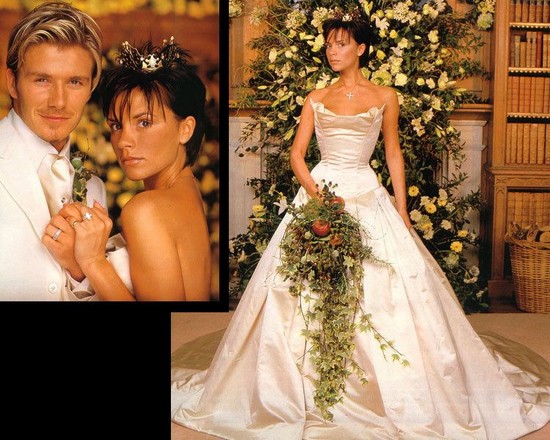 She may have started out as a singer, but Victoria Beckham’s forages into fashion mean that few of you will be surprised to see her gown included in our roundup.

This is yet another case where Vera Wang gets a mention, with the designer putting together the dress that Victoria wore as she exchanged vows with David Beckham in 1999.

With an estimated price tag of $100,000, it certainly wasn’t cheap, but in comparison to some of the gowns that celebrities have worn it wasn’t the most expensive you’ll find either.

Strapless by design, the ball-gown skirt capped it off and completed a purely elegant and traditional appearance.

Suffice to say, the wedding as a whole was an extravagant affair. Despite the couple living under the spotlight for so many years, they’re still going strong. 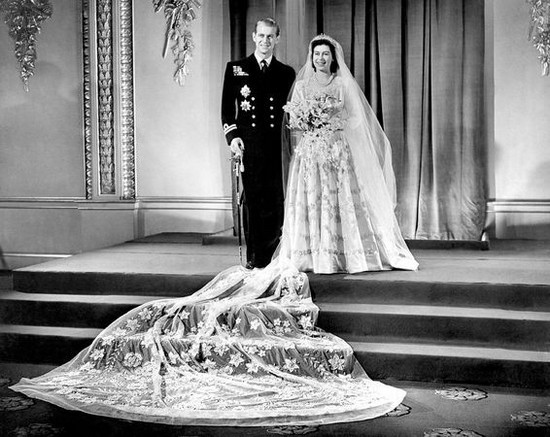 The phrase iconic has been coined plenty of times through this roundup, so it stands to reason that Queen Elizabeth II should be given a mention.

During her wedding to Prince Philip in 1947, the Queen donned a dress which had been created by the Court Designer. It contained star patterns, with the focal-point being a 13 ft. long bridal train. While it didn’t contain straps, it was blessed with long, silk sleeves.

One of the most interesting elements to this dress is the method in which it was purchased. During this era, clothing was rationed and she actually bought it through ration coupons.

The wedding took place on 20 November 1947 in Westminster Abbey and as we all know, they’ve lived happily ever after since.

Check out the bestsellers under Women's Clothing, Shoes & Jewelry!